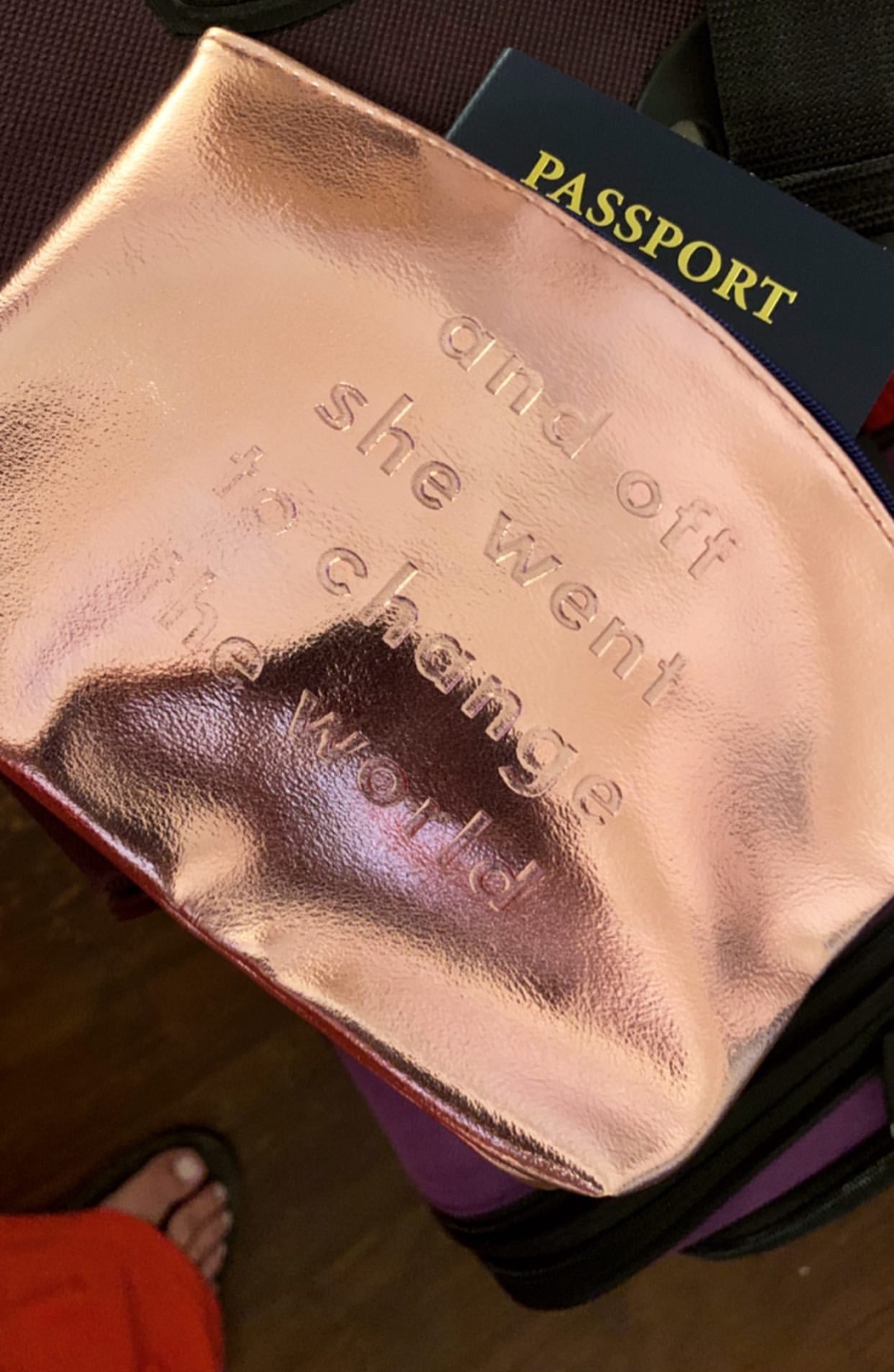 I love to travel. Well, okay, this is something that I say, but don’t really mean. It is, however, the easiest way to say, “I love eating in different cities and sleeping in nice hotels.” I have been lucky enough to have visited most of the United States while growing up, and as an adult, I had a job that required me to travel to Paris a few times. And for vacation one time, I visited a friend in Italy and we went to Amsterdam together. These trips were many years ago though, and my mobility and size have changed. I have always been fat, but am more fat now (thank you very much). I had never had mobility issues, however, but since hurting my back several years ago, my right hip is now a mess and it can cause me a lot of pain and hinder my abilities. And so I decided to write about my recent trip to Amsterdam and Paris, as a fat, sometimes disabled person.

I started writing this essay and had almost four pages before I realized that I hated it. I hate that this is something that folks have asked me for since I went on my trip. I hate that society shames us for being what we are and so we get embarrassed to even exist, let alone speak freely about our experiences in this world. As of 2016, 39.8% of people are considered fat. I am sure more folks are fat now – possibly half the world is fat. And yet, instead of realizing that this is our reality, our world is focused on how to make us less fat instead of making it easier for us to navigate the world as we are. There are piles of research and data that show 1) diets don’t work 2) fat shaming doesn’t work and instead makes it worse 3) weight and health are not the same thing, and yet the diet industry is worth $72 billion, and that doesn’t even include weight loss surgeries. After reading these stats, I decided that I am going to rework this piece a bit; the hints and tips will be at the end.

My fiancé and I flew out of Los Angeles Airport (LAX) on Air France – it was a direct flight to Paris Charles de Gaulle Airport (CDG), which was just over 11 hours. We had purchased our tickets via Delta, but they are partnered with Air France and we were notified a few days before that we would be flying with them instead. Flying is the absolute worst part of traveling while fat. I hadn’t flown with someone else in a long time, but I had some anxiety relief because I knew that it would be my partner squished next to me, and not some angry stranger. As we all know, the seats on planes are barely big enough for children, let alone someone that’s fat.

Air France, in my opinion, had the smallest damn planes ever. I had to walk sideways down the aisles, and once in my seat, I felt like I was in every single person’s way. I would strongly urge you not to fly Air France if you have an option. The chairs are old and dirty (thankfully I brought disinfectant wipes for our trays and the TV which is on the back of the seat in front of you) and the food is diarrhea inducing. There also seems to be way less space in between the rows, meaning way less leg room.

11 or so hours later, we landed in Paris and had to walk for what seemed like a comically long time to get our luggage. There was a point where we rounded another corner of the airport and there was a whole set of those adjustable ribbon gate things to herd us like cattle, around and around, just to get to another room in the airport and I legit said, “are you fucking kidding me?” I had been sitting in a tiny chair for 11 hours and my hip literally felt like it was going to fall out of place and I had to walk for what seemed like an hour to get from the plane to my luggage. Good news is, once we got our luggage, getting a cab was very easy, and we arrived to our hotel too early to check in.

It was our anniversary. We literally landed in Paris on the morning of our four year anniversary and I wanted to surprise him with a hotel that had a personal hot tub. The room wasn’t ready, and we were exhausted from the flight, and I apparently fell asleep in the hotel lobby. According to him, it was impossible to wake me up and I was snoring really loudly. The young woman working the desk actually told him it was fine to leave me, that’s how hard it was to wake me up. I am a light sleeper, so this is bananas to me. I guess all the anxiety of being crammed on a flight forever made my brain shut down once we were on the ground. Anyway, he got me up and we walked into our room to find that the bed was super short (I am only 5’7” and my feet were hanging off the end) and the hot tub smelled like mold. We sat in it for maybe 5 minutes before realizing that it was coming from the tub and not the ground where the water was collecting from it splashing over. So that whole sexy surprise ended in us walking around Paris late at night for an anniversary dinner. 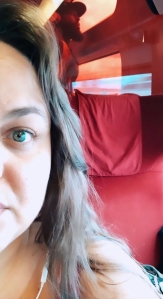 We booked a Thalys train (high speed French-Belgian train) from Paris to Amsterdam the next day. We checked out of our short bed room and caught a cab to the train station. This is something so important that I can not stress enough: bring small luggage. We had brought two medium size suitcases, one large one, and one small one. The large one broke before we even took off for Paris and there was no handle to pull it on its wheels so he basically had to carry it around the train station. It made for a very grumpy time.

The train ride was just over three hours and a happy travel accident was that the hotel in Amsterdam was legit across the street from the train station. We just walked our asses across a street and checked into our much fancier hotel. After cleaning up and changing our clothes, we walked around Amsterdam. I was on a mission to find the nearest Wok to Walk – it is my favorite Amsterdam spot, sorta like a Mongolian BBQ, and you get to pick the stuff that they stir fry into your dreams. It wasn’t until after we ate at the one Google directed us to that we discovered there was one right around the corner from our hotel, which ended up being our daily meal choice.

Obviously, Amsterdam is known for their coffeeshops (cannabis stores). There are coffeeshops all over the city that offer different things: some have the best hot chocolate, some play rap music, some allow you to drink alcohol, and some allow tobacco smoke inside. We went to a few different ones before settling on our favorite shop that happened to be around the corner from our hotel as well, Coffeeshop de Kroon. The music was awesome (rap, hip hop, neo soul, African beats), the staff were rad, there was a kitty that lived there who became my friend, there was no alcohol, they didn’t allow tobacco smoke inside, and the bathroom was clean. Fun fact: California is now known for having the best weed – every coffeeshop has a Cali menu in addition to their Amsterdam strains and it costs about three times as much. 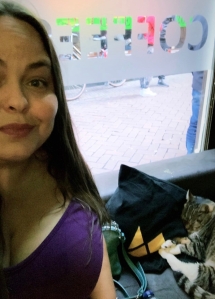 There were three different things that happened in Amsterdam that are important enough to warrant a list. 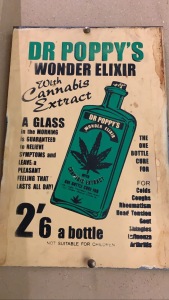 We were supposed to take a train from Amsterdam to Brussels, but instead decided to stay longer in Amsterdam. We canceled the Brussels portion of our trip and ended up poisoning ourselves (don’t ask) and staying in the hotel for almost 40 hours. I am glad that it worked out how it did, but we did stay longer in Amsterdam hoping to see some museums that we never made it to and instead we only went to the cannabis/hemp museum.

The train back to Paris was uneventful and hailing a cab to our hotel was easy. The cab driver was very informational and told us all about the neighborhoods that he was driving us through and then told us that where we were staying was a great spot for walking. He was right – we were a 5 minute walk from the Louvre or the Opera, and just a 10 minute cab to the Eiffel Tower. We didn’t know until the night before that we happened to be in Paris during Nuit Blanche, which meant that a parade of art went right by our hotel and everyone was out in the streets. It was awesome!

The highlights of Paris were definitely just walking around, seeing the architecture (the doors!), and the night we went to the Eiffel. Maybe it is because the last time I saw it I was with a group of coworkers that I wasn’t fond of, but it just felt way more magical with my fiancé. I was feeling really gross that night and had already settled into the room when he decided to go and I am so happy I rallied and went along with him. 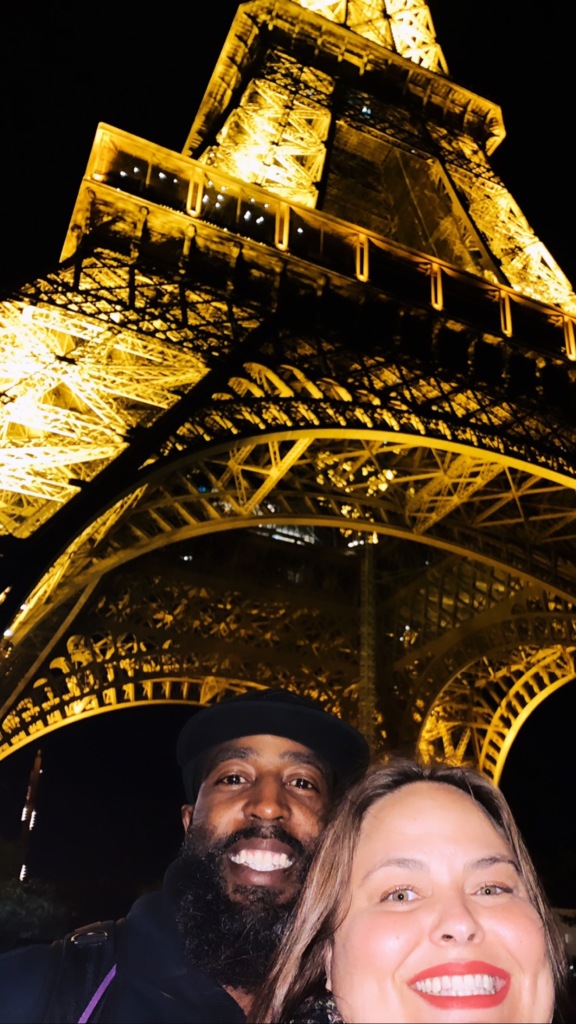 Overall, the trip was a success. We saw things that neither of us had seen before, we tried new food (he ate escargot, I did not), walked all over Paris, and started saying “merci” so much that I still said it when I was checking out at the grocery store back in LA. I discovered that French food is not my jam, and when all else fails, I prefer a good bowl of Asian food over anything else. Oh! And while in Amsterdam, don’t eat frites covered in mayo for dinner, no matter how good it sounds. You will be pooping your face off the next day.

1 comments on “Traveling while fat”